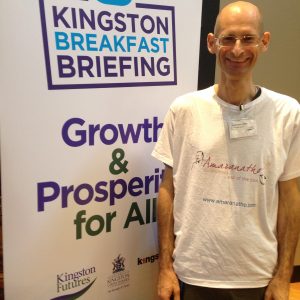 Amaranatho was born in England and brought up in the Jewish faith, but in his late teens had severe doubts about the faith and left all religion behind to work within the computer industry. He was very successful at young age and became technical support manager for Europe for a computer company dealing in parallel processing. He has worked in various research labs including BP, Philips and the center for cognitive Neuroscience at the University of California Davis.
He spent four years traveling and hitch hiking the world, during this time he started to learn meditation and lived long term in a number of retreat center in Asia and Europe. In 2000 he took the decision to become a novice Buddhist monk and resided and trained at Amaravati Monastery near Hemel Hempstead for ten years and lived as alms mendicant. During his time he ran young people, family camps and creative residential mindful retreats for adults. He then left the monastery and became a freelance Buddhist monk and lived on a organic farm, running gardening and mindulness retreats. He got black mould poisoning and end up spending a the next two years healing himself on every level.

At the same time in traveled to Malaysia and Australia with the brand playfulmonk where he facilitated many retreats, workshops, talks on mindfulness and self-development. He disrobed in 2015 with 15 years experience of being a monk. During this time he undertook many meditation for himself including three and one month retreats.

He also facilitates Jewish-Buddhist meditation retreats, men’s retreats, parenting courses, stress management courses, and trauma workshops and host of other personal development course. With the UK he works as lead trainer and facilitator for the national charity AFAN. He has also been part of the Eton college based Wisdom project and has facilitated a large number of workshops for young people exploring the big questions in life, as well as train teachers to do the same.

These events are based on co-exploration, playfulness, love and a willingness to honestly look at oneself. They use cutting edge scientific research, multimedia and are influenced by the wisdom traditions of the world. The main emphasis is on a contemplative or reflective attitude towards understanding who we are. He facilitates a safe space by accepting or welcoming the way life is, enabling you to recognize your own wisdom. He is interested in finding ways of being authentic while recognizing that everything is already okay.

Amaranatho also mentors/supervise other facilitators and religious leaders as well as working as life coach and spiritual guide to anybody that is interested about finding out more about themselves and why they suffer. He has trained in Source Process Breathwork, where the breath is used for healing life-limiting decisions made since we took our first inhalation (http://binnieadansby.com/ and http://www.fatherstobe.org/). He is influenced by Ken Wilber’s integral approach and shadow work. He has also learned  Trauma Release exercise from Dr. Berceli.

He has edited two books on mindfulness by Ajahn Sumedho, the Abbot of Amaravati, one called Intuitive Awareness which is available for free distribution and has been translated into several languages, and another called The Sound of Silence available from Wisdom Publications. The following is taken from the introduction to the Sound of Silence and explains the style of meditation he uses.

… This book in its entirety is a contemplation, a reflection on the “way it is.” in Ajahn Sumedho’s words, this reflective approach is an empowerment. I am presenting things for you to investigate. I am not telling how you should think or even practice but presenting things to stimulate you, to look at things rather than just accept what I say or disagree with it…

Reflection is not something that you can do—it’s what the mind inclines to when you are relaxed and open. Another way of saying this is, it’s an attitude: the way you look at yourself and the world, is a choice—a choice to be who you really are, rather than what you think you may be…

Contemplation, on the other hand, is using the thinking mind to reflect. It’s taking a thought consciously, letting it affect the mind arid seeing what effect it has. To help with understanding this, Ajahn Sumedho reflects a lot on self personality or who we think we are…

…Ajahn Sumedho’s reflections offer humor, and deep insight into the conditions that support these complexities. He suggests that in reacting to these complexities, we tend to refer back to something we have learned, through our social and cultural conditioning. This is already the past, a memory. So we get manipulated, either by our own memories or by the social, cultural, and political environment. In this process of waking up, you are asked to investigate who you are, what the world is. In this way when we come from stillness, rather than reaction, we can then serve ourselves and humanity…

sometimes we can take life so seriously. By taking some of the human conditions and turning them into absurdities, we can get perspective on the way we bind ourselves to those very conditions. So, when we start to accept ourselves as we are, not as some ideal of who we think we should be, a relaxation can take place. This creates space for insight to arise. For some people this space is recognized as what Ajahn Sumedho refers to as the sound of silence, or simply a quiet or empty mind. However it manifests, this points to the unconditioned, beyond body and mind objects…

From this place of spaciousness, social and personal conditioning can be investigated or reflected upon, thus freeing the heart from the delusion of identifying with the personality. This is not a process of rejecting ourselves, of considering certain thoughts and feelings as wrong, but of learning to be a silent witness to all that arises without attaching to that experience or rejecting it. In essence it’s about trust, accepting what arises in experience as “the way it is” or, as Ajahn Sumedho often likes to say, “welcoming the suffering.” It is about listening, being receptive to and fully including everything…

Here is some of the influences on my practice….

Evan Thompson  – the co-author of The Embodied Mind: Cognitive Science and Human Experience

I have been influenced by Ken Wilber – All Quadrants All Levels (AQAL), integral approach, although I appreciate under meta analysis, there is much more to say on this. There are two works of his I often use, which I still find helpful. Firstly, the spectrum of consciousness using the right tools for the right job. Secondly, using the analogy of vertical as enlightenment and horizontal as personality, to have the widest in both so that the full force of truth can come through. For example if you have been arrested in psycho-sexual development you might well abuse, even if you have had a enlightened experience.

When you apply the AQAL framework its means one needs to not just look at one own experience but also how it effects the world, the environment and other people.

I’m also interested in many non-dual teachers, friends, family and life itself.